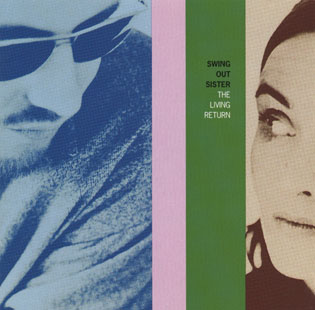 *UK version was available as a two CD set which contained "The Living Return" as well as a 6 track bonus CD of "Live At The Jazz Cafe."

All tracks written and arranged by Andy Connell and Corinne Drewery
Except 5, 10 & 12 written by Connell/Drewery/Johnson/Cansfield
7 written by Bell/Hart
11b written by Drewery/Connell/White/Moreira/Werneck/Reis/Wonder/Moy/Cosby/Lins/Martins/De Oliveire/Hancock/Maupin Burick

Urban gypsies, techno-realists, system survivors and soul detectors, Swing Out Sister spent the best part of the eighties perfecting quintessential British pop, in hit songs which earned them acclaim all over the world.
Now, following three studio oriented albums, "It's Better To Travel", "Kaleidoscope World" and "Get In Touch With Yourself", Swing Out Sister's Andy Connell and Corinne Drewery have moved towards a more fluid sound, a band-oriented sound which sashays and sways with delicate rhythms...a new sound which manages to capture the band's triumphant live feel without relinquishing their fine pop sensibility and high production values.

Their brilliant new LP "The Living Return" is something of a radical departure in as much as it acknowledges their latent jazz tenancies, a penchant that can be heard on everything they've recorded from "Blue Mood", "Surrender", and "Where In the World" right through to "Get In Touch With Yourself" and "Am I the Same Girl". This has added a new dimension to the already multi-faceted Swing Out Sister sound. The tunes are still there too, and "Feel Free" and "Making the Right Move" - two songs from the new LP - are without a doubt the finest things the band have ever recorded - haunting, lyrical, and quite, quite uplifting.

On stage, the band have always excelled at creating a unique blend of pop, soul and jazz, and last year decided to commit their live sound - which has been honed on a hundred states from Manhattan to Osaka - to disc. Whilst mid-tour with their band, consisting of Myke Wilson (ex Jazz Defektors) on drums, Derick Johnson (ex 52nd Street) on bass, Tim Cansfield (honorary Calypsonian) on guitar, Latin-esque percussionist Christ Manis (Pa'lante) soaring vocalists Sylvie Mason-James, Erica Harodl and Derek Green, and their brass section - John Thirkell on Trumpet, Gary Plumley on saxophone and Richard Edwards on trombone - they recorded several gigs resulting in the album "Live at the Jazz Café". Only released in Japan, but nevertheless confirming that Swing Out Sister had a wealth of unexploited talents in the field of live performance and arrangement, they decided to pursue this raw and live route with "The Living Return". With new songs like "Better Make It Better", "Don't Let Yourself Down", "Stop and Think It Over" along with the aforementioned "Feel Free" and "Making the Right Move", the band have proved beyond all doubt that it's possible to add warmth and depth to studio recordings without losing spontaneity.

Swing Out Sister's jazz-tinged pop is the missing link between Francis Lai and Curits Mayfield, between Martin Denny and Gil Scott Heron, between Earth Wind and Fire and Tania Maria, between the Ohio Players and Burt Bacharach..it is, of course, something quite unique, something hard to pin down.

But then to paraphrase the late, great Louis Armstrong, if you have to ask what Swing Out Sister is, you'll never know.