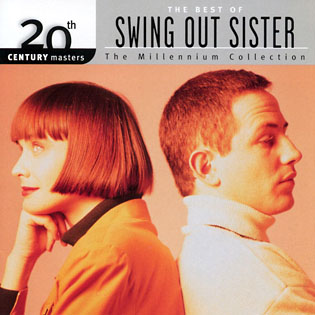 Liner Notes:
Swing Out Sister burst onto the British mid-'80s pop scene all pluck, shine and champagne sparkle. Sporting a sleek jazz-savvy electropop-sound, they found a comfortable phonic fit alongside chart contemporaries Sade, Matt Blanco, and Everything But The Girl.

The trio was originally comprised of three musical madcaps united by a common love of Northern Soul. Keyboardist Andy Connell had been one quarter of A Certain Ratio and percussionist Martin Jackson worked the beat in Magazine. Both were well-established Manchester musicians while singer Corinne Drewery, a fashion design student and part-time model who spent a few moments in Working Week, hailed from Nottingham. They christened themselves after an obscure Billie Burke "B"-musical from the '40s because it was the only name they could agree upon - they all agreed that they hated it. Their combined credentials were impressive enough to secure a recording contract with Mercury UK, where they hooked up with producer Paul Staveley O'Duffy, who'd helmed high-gloss hits for labelmates Hipsway and Was (Not Was). O'Duffy fast made himself an indispensable member of the team, retrofitting their beloved Northern Soul for the supper-club circuit.

In a gimmicky yet impress show of faith, Swing Out Sister was awarded its own vanity prefix in the PolyGram singles numbering system, starting with the debut single "Blue Mood" (SWING 1) in May 1986. In an introductory interview with tastemaking UK glossy, The Face, Connell cheekily admitted, "At the moment, we couldn't sit down and write a hit single if we tried." This proved to be a self-fulfilling prophecy when "Blue Mode" vanished as quickly as it came.

That huge hit they'd been eluding caught up with them rather quickly. "Breakout" - their aptly titled sophomore single released in September - dished up three-and-three quarter minutes of peppy positivity and shot to #3 in the UK singles lists. In the wake of "Breakout," they began assembling their first full-length album single by single. The urgent abandon of "Surrender" surged to #7 early in 1987, and the dusky atmosphere of "Twilight World" drifted to #32 that spring. When It's Better To Travel premiered in May, it quickly topped the British chart.

British accolades don't always translate stateside success, but when "Breakout" finally arrived on American shores nearly a year after its initial release, VH-1 (then a pop-friendly 24-hour music video outlet) awarded the colorful campy clip "Nouveau Video" status, garnering weeks of heavy rotation. The single bounded to #6 on the Billboard Hot 100 and topped the Adult Contemporary chart, where "Twilight World" and "Surrender" also made significant inroads. It's Better To Travel when gold on the strength of added airplay from smooth jazz radio stations that delved deeper than the singles.

Soon after staring work on their second album, Jackson departed in pursuit of more "rock-oriented projects," according to press releases from the label. Now a duo, Drewery and Connell downplayed the more deliberately daffy elements of their act and recast themselves as '60s sophisticates. Paul O'Duffy and Connell found sonic inspiration in the softer sounds of that era: the refined songcraft of Burt Bacharach and the sumptuous film scores of John Barry. Drewery revealed herself to be sultry chanteuse - less brassy Shirley Bassey with a liberal sprinkling of Dusty Springfield for good measure. With a spirit that's more continental cafe than cocktail lounge, Kaleidoscope World stands as their definitive work. Britons were treated to the bring new sound with "You On My Mind," a colorfully orchestrated affair that hit #28 in the spring of '89. Meanwhile, the first stateside single was "Waiting Game" which returned them to the upper reaches of the Adult Contemporary chart.

When Kaleidoscope World wasn't the runaway hit it deserved to be, Drewery and Connell conceded that perhaps they were too clever for their own good - or simply that the world wasn't ready for a return of sophisticated popcraft. With newfound resolve, they returned in 1993 with Get In Touch With Yourself - a more production-driven effort on which O'Duffy dressed up their '60s sensibilities with drum loops and other technological gadgetry of the day. For the album's first single, they trundled out a jubilant cover of the Dusty Springfield/Barbara Acklin chestnut "Am I The Same Girl?" which had been a stateside smash in its original instrumental incarnation as "Soulful Strut" by Young-Holt Unlimited. Swing Out Sister bested both vocal versions chartwise, and collected a second #1 AC hit for their efforts. Get In Touch With Yourself spawned a second single in the shape of "Notgonnachange," presented here in its bright radio ready remix by O'Duffy. After beginning work on their fourth album with O'Duffy, Connell and Drewery abandoned the project to reinvent Swing Out Sister as a jazz combo. They staffed ranks with seasoned pros and took off on a tour of intimate clubs. The spirit of the experiment continued in the studio with new producer Ray Hayden for The Living Return which found them extending their customarily tight pop hooks into free-form, mini-jam sessions. The album's soul concession to commercialism was a cover of "La La Means I Love You." It was originally thrown together for the soundtrack of Four Weddings And A Funeral - which suggested the Delfonics by way of Bacharach. It even featured sly snippets of "Do You Know The Way To San Jose?" bookending the track.

Britain opted out of issuing the fifth album, Shapes And Patterns, which marked a return to form and a reunion with O'Duffy. The original version of "Better Make It Better" from the aborted sessions was included, as was the album's first single, "Somewhere In The World" - a happy harkening back to the pastel palette of Kaleidoscope World.

Ever since their "Breakout" days, Swing Out Sister have been perennially popular in Japan, where they've released specialty remix and live collection unavailable elsewhere. They have even been commissioned to write "Now You're Not Here" as the theme for a Japanese TV series. Therefore, it came as no small surprise that their sixth album, Filth & Dreams, wasn't released beyond the Asian marketplace. With O'Duffy once again at the board, the album's leadoff track "Who's Been Sleeping" was pure Swing Out Sister with a slight hip-hop edge.

While this collection offers a titillating 11 song overview of their PolyGram career, Swing Out Sister is still very much an active concern. Drewery and Connell have since started their own label, Vivo, and unfettered by the restraints of corporate policy, they released their seventh album, Somewhere Deep In The Night, in May 2001. Again, Japan gets first crack at the record, but their fans around the world will ways find a way to get their fix of Swing Out Sister's special brand of cosmopolitan cool.