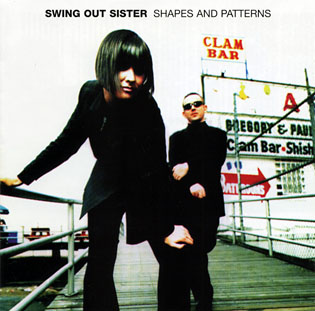 Somewhere in the World
Someone's thinking of You...

Swing Out Sister's world is one of harmonic sophistication--where whimsy and sensuality join together in an aural playground.
It's her effortless scatting of hot, poetic phrases without breaking a sweat, teasingly changing key against her counterparts' reticular vocalese. It's his feverishly funky climb up the scales.

For their brilliant filth release, Shapes And Patterns, singer-songwriter Corinne Drewery and keyboardist-arranger Andy Connell are shimmying, clapping and grooving their way up the musical timeline, turning on a moment to retrace the essential nuances that lay between chapters of social change and upheaval.

They are children of the sixties, balancing the youthful enthusiasm of Sesame Street with the maturity of a revolutionary movement, channeling through the multicultural conduits of that era: Listen closely to influences such as The Fifth Dimension, Minnie Ripperton & Rotary Connection and The Jackson Five. They blend soulful, joyous sounds with unwitting personal politics, promoting consonant liberation through their music. They even plucked the stream-of-consciousness consortium, "Stone Soul Picnic" from the urban-pop songbook of wonderkind Laura Nyro as a tribute. Having as much social relevance today as it did then, "Picnic" is a reminder that despite our differences, we often share a common goal towards love and understanding. There's no doubt their single "We Can Make It Happen" will have the same in twenty years from now.

The dreamlike theme which flourishes through the album like a cinematic interlude -- a romantic intermission of sorts -- is ear candy. This lyrical and melodic departure from their previous catalogue of emotionally complex material deftly explores the essence of day-to-day living to provide the soundtrack of our lives.

With arrangements ranging from lucid to bouncy, Shapes And Patterns is a profoundly evocative mix of sharp, orbitally orchestral sequences, rhythmically sensual ballads, and heavens-parting contrapuntal voicing as demonstrated on such tracks as "Somewhere In the World," "Now You're Not Here," "Something Out Of This World," and "Always," a gloriously buoyant tune.

Revisiting the lush string arrangements and Latin rhythms married by striking time signature changes--made familiar by such greats by Burt Bacharach, Jimmy Webb and John Barry--the duo integrate the sound of yesterday with the technology of today on the aptly titled "Here and Now."

Rounded off by an equivocally passionate band--Cansfield on guitar, Louis Jardim on percussion, Derick Johnson on Bass, Andrew Small and Gota Yashiki on drums -- Swing Out Sister created a spontaneous party-like atmosphere and a feeling of togetherness. The redux of their funk hit, "Better Make It Better" has an earthiness about it. Everyone in the studio -- from the indelibly holy Frank Campbell right down to the engineer -- participated in a session. Above the handclaps, the laughter, and the ad libs, you can hear the rich backing vocals of Beverly Skeete, Derek Green, Sylvia Mason James, Stevie Lange, George Chandler, Melody Sexton, Lance Ellington, Mirlam Stockley and Leon Daniels warmly nestle into the rhythm and brass sections. Akin to the multicultural concept, there are may textures and colors on this album that make up the fabric which comprise their signature sound.

If you were once unfamiliar with Swing Out Sister, let Shapes and Patterns be your introduction to the force responsible for sending chills up your spine, a longing in your heart, and the determined bellow you shout from the deepest echelons of your soul. And now for your listening pleasure...