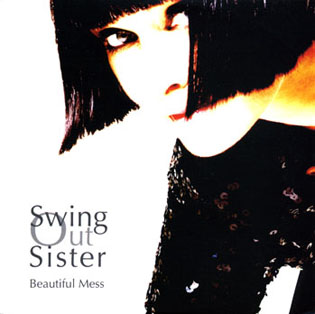 No liner notes are included in the sleeve originally released directly by Swing Out Sister. Note: The original CD sleeve contains a typo directing the site to swingoutsister.co.uk instead of swingoutsister.com.

A special double disc version of "Beautiful Mess" was released in March 2009 which includes their previous release "Live In Tokyo."

The US release (May 2009) contains two additional tracks, Something Every Day (Late Night Studio Take) and Breakout (Late Night Studio Take) with a minor track list change. Something Everyday (Little Wizard Mix) and Butterfly (Little Wizard Mix) have been flipped for this release. The audio player above reflects the US track order.

Notes from the retail release:

Thank you to everyone who has helped us along the way, including Gersende Giorgio for good vibes and advice, Gina Foster for time and love, Jamie Spencer, Kaz Utsunomiya, all at Avex Japan including Sig Fujita, Hidehiro Ishii, Akiko Ihara, Asako Tsuchiya, Risa Uzushiri